Many of us take our seat on board the airplane and do not think twice about flying but unfortunately for those with a fear of flying, it can be a traumatic experience and despite airlines offering huge discounts their decision is often to simply not fly.

Aerophobia, aviophobia or aviatonphobia, which is commonly referred to as Fear of Flying, is not restricted to just flights and flying, it is also related to claustrophobia and even agoraphobia in some cases, causing extreme symptoms of negativity towards flying both psychologically and physically.

People suffering from Aerophobia sometimes complain of fear of all kinds of open spaces (agoraphobia), fear of confined spaces (claustrophobia), or even fear of falling, causing a detrimental development in the sufferer’s quality of life.

Reasons for fear of flying

There can be several individual reasons leading to aerophobia, some of the most common ones being a bad past experience, adverse reaction to media reports displaying terrorist activities or mid-flight emergencies, fear of confined spaces. 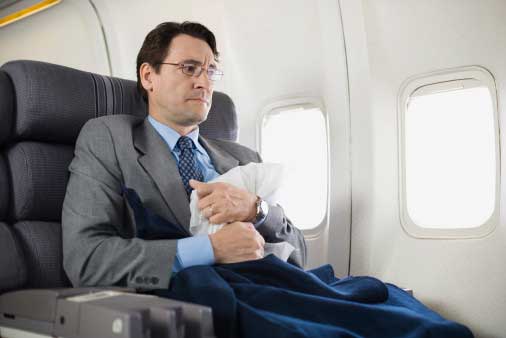 Worldwide more people die on the roads every day than die in air crashes in a year. But images of a relatively rare air disaster make far better TV news than a two car smash on the motorway. Making big air disasters become engrained in some people’s minds until they become a genuine fear.

There are also many reasons that spike in your “nervousness” levels may occur acrophobia, travel sickness, turbulence, fear of terrorism, etc. One other curious fact about fear of flying is that it is the only fear that is known to possibly increase the more you encounter the situation.

Fear of flying is common

This fear is very common and affects one in every six people. During such attacks, the body’s adrenalin level spikes upwards and the flow of blood in your body greatly increases, causing the human body to cease to function in a normal fashion.

Meaning people who are afraid of snakes will usually loose that fear if they encounter snakes on a regular basis. For some people the more they fly the worse the fear can become. There is a range of ideas you can implement in order to overcome your fear of flying.

There are a couple of relaxation methods that you can apply on yourself to save you from this and other kinds of fear and stress. Muscular Relaxation, this technique concentrates on relaxing the musculo-skeletal system from the anxiety and fear that it is bearing. Deep-Breathing. These exercises will help you calm down and relieve you from stress and tension. END_OF_DOCUMENT_TOKEN_TO_BE_REPLACED